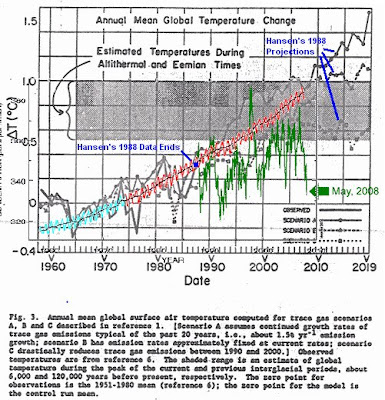 To commemorate the 20th anniversary of NASA scientist James Hansen’s Congressional global warming testimony, Warren Meyer posted the above slide from Hansen. Added by Warren to the plot are the actual average global temperatures recorded since the 1988 testimony (the green data series) to show how poorly Hansen’s 1988 projections are reflected by the real temperature record.

I have also superimposed NOAA's measured atmospheric CO2 measurements from 1958 to 2007 that were posted recently by Anthony Watts (the cyan and red line).

A couple of points stand out to me.

First, at the time of Hansen’s testimony (the blue dot), his temperature data demonstrated an exceptionally strong correlation with atmospheric CO2. Based on this limited data, he had reason to be alarmed at that time. He clearly believed this, saying in his testimony.

The main point to be made here is that the expected global warming is of the same magnitude as the observed warming. Since there is only a 1 percent chance of an accidental warming of this magnitude, the agreement with the expected greenhouse effect is of considerable significance.

It should be noted that the superimposed actual CO2 plot tracks Hansen's projected 1988 to 2008 worst case plot fairly closely.

However, his projections of temperatures after 1988 show that his model broke down almost precisely when he testified. This could be due to a saturation effect for CO2 at that level or (more likely) shows Hansen got lucky (that "only a 1 percent chance of an accidental warming" did happen) with his early model applied from 1964 through 1988. There may really be nothing there, except a coincidence.

The other point was first made by Meyer.

Yes, 2008 has been far colder than 1988. We have seen no warming trend in the last 10 years, and temperatures have undershot every one of Hansen's forecasts. He thought the world would be a degree C warmer in 20 years, and it is not. Of course, today, he says the world will warm a degree in the next 20 years -- the apocalypse never goes away, it just recesses into the future.

I’ll add that there was indeed a modest amount of global warming from 1988 to 2001, with a plateau through 2006 that was about 0.2 degrees Celsius warmer than 1988. But global temperatures have since declined. Declined so much that the average global temperature is now 0.2 degrees Celsius less than 1988, not the 0.7 degrees higher that Hansen predicted. A difference of minus 9 tenths of a degree Celsius.

Hansen learned from his earlier testimony, no predictions in 2008. Just calls for prosecution of those that do not buy Dr. Hansen's groupthink.
Posted by Headless Blogger at 7:39 PM